Many American Muslims have contributed to the development and improvement of education in our community. Some of these leaders have been taken from us through death, and we wish to remember them and the contribution they made.

“To God we belong; and to God we shall return.”  Arabic transliteration: “Inna lillahi wa inna ilayhi raji’un.”

Co-Founder and Executive Director of ISLA

Karen Keyworth was a pillar of the Muslim educational community in the United States. She was a pioneer in Islamic education for nearly 30 years, founding an Islamic school in East Lansing, MI, and co-founding the Islamic Schools League of America (ISLA). One of the pinnacles of her educational efforts occurred in 2015, when she was awarded the prestigious Lifetime Achievement in Islamic Education Award by ISNA.

Feeling the lack of options for Islamic schooling in her hometown of East Lansing, MI, Keyworth founded the Greater Lansing Islamic School (1996), which today has 163 K-8 students. In addition to being the founding principal, she taught English as a Second Language and Language Arts (1-3), implemented the writing process (K-8), integrated reading and writing across the curriculum and was responsible for assessment. Her administrative duties included curriculum design and supervision, teacher and staff hiring, serving on the school board, budgeting, fundraising, student recruitment and community and parent/school liaison.

In 1998, she partnered with Judi Amri of Fairfax, VA to found this organization, the Islamic Schools League of America (ISLA), in order to strengthen Islamic schools by facilitating networking amongst North America’s K-12 private Islamic Schools and educators. The ISLA remains the only organization dedicated solely to supporting Islamic education in the U.S. She managed one of the ISLA’s main contributions: the Islamic Educators Communication Network (IECN) email list, which comprises over 450 educators across North America.

Keyworth handled ISLA’s networking, public relations, and fundraising, as well as created policy and identified trends. In addition, she conducted research, and provided interviews and support to those seeking to better understand Islamic education. She authored approximately 80% of the site’s current web content and was the main writer for its webpages. As an ISLA representative, she made presentations at numerous community conferences and worked with educators to establish standards and best practices.

She researched Islamic schools in the US via designing and analyzing data collection and written results for a 2007 publication by Georgetown Universe and the Institute for Social Policy and Understanding. Her research was also published in “Educating the Muslims of America” (ed. Yvonne Haddad and Farid Senzai). In addition, she published eight articles for Islamic Horizons, nearly half of which were anchor articles for its annual education issues.

She held a Bachelors (linguistics, 1980) and a Master’s degree (English and Teaching English to Speakers of Other Languages (1982), both from Michigan State University. She spent almost 25 years as an adjunct professor at Jackson Community College and at Lansing Community College. At the latter, she taught ESL courses and developmental writing. During her eight-year ensure, she held the position of Portfolio Coordinator.

She frequently liaised between the community and the media, spoke about Islam at schools and churches and served as the chair for the American Muslim Council’s Lansing chapter.

After accepting Islam as her ultimate way of life on Ramadan 19, 1400 (July 31, 1980), Dr. Jamilah Linda Kay Kolocotronis Jitmoud dedicated her services to Islamic education and authored Islamic novels that have touched Muslims and non-Muslims all around the world, Al-Hamdulillah.

Dr. Jamilah Linda’s contribution towards Islamic education began in the summer of 1986. She was looking for a school for her oldest son, who was four years old at the time. Ahmad was the type of boy who had a mind like a sponge and absorbed everything quickly. Dr. Jamilah Linda didn’t feel that simply any American preschool would be an option. She asked Allah for guidance to help her find a proper alternative for her son’s education. Read more in this pdf document or here in Horizon Magazine: http://issuu.com/isnacreative/docs/ih_mar-apr_13/59

This is for the father of our community who died in a car accident. He was coming back from a lecture in Norman Oklahoma. He was fasting at the time of the accident.

(2006) Wichita’s Muslim community is dealing the tragic loss of one of their leaders. … Seyam was leader of the Islamic Society of Wichita. Thousands in the Muslim faith know him and his family. Seyam was also principal of the Annoor School. He helped it grow from its first 30 students to nearly 130 today.  Read more … http://www.legacy.com/guestbook/kansas/guestbook.aspx?n=nabil-seyam&pid=19547091&pageno=1

Sharifa Alkhateeb, an advocate for Muslim culture in the United States who helped place courses in Middle Eastern cultures and Arabic in public schools, died on Oct. 21 at her home in Ashburn, Va. She was 58. The cause was pancreatic cancer, said her daughter Nasreen. Ms. Alkhateeb, who was born and raised in Philadelphia, spent much of her life interpreting Islam.  Read more …  http://www.nytimes.com/2004/11/04/arts/04alkhateeb.html?_r=1 )

By Cal Blethen and Janet I. Tu

Mohammad El-Moslimany, a pioneer, leader and unifying voice among the area’s Muslims, died Monday of a rare brain disease. He was 79. When Mr. El-Moslimany moved to Seattle in the early 1960s, his was one of a handful of Muslim families in the area. He helped found some of the institutions that are central to the lives of many local Muslims today – including the Islamic Center of Seattle and the Islamic School of Seattle. Read more … http://community.seattletimes.nwsource.com/archive/?date=20030702&slug=moslimanyobit02m )

Dr. Ann Paxton El-Moslimany, Ph.D., who along with her (now late) husband Dr. Mohammad El-Moslimany (1924-2003) founded the Islamic School of Seattle in the late 1980s which she led for forty years, passed away on January 25, 2021, after a prolonged illness.

Dr. El-Moslimany was a cornerstone of the early Muslim community in Seattle. The Islamic School of Seattle in the early ’80s put into reality her vision of what a truly modern Islamic school would look like, infused with elements of Montessori learning and holistic education. She made the Islamic School of Seattle her life mission such that children of all faiths, racial, ethnic, and economic backgrounds could have access to quality education.

El-Moslimany, who had a Ph.D. in botany, was the author of Islamic books and science research papers, had taught in Kuwait University, Kuwait (1984-86) and Seattle Central Community College, Seattle (1986-1990). She was the author of “Zaki’s Ramadhan Fast” (1994) and “Teaching Children: A Moral, Spiritual, and Holistic Approach to Educational Development” (International Institute of Islamic Thought, 2018).

Teaching Children is a necessary read for Islamic school educators. In her book, El-Moslimany advocated for teaching the whole child, building foundationally from the concept of tawhid, while also drawing upon fitrah and activism.  She commented on the value that an Islamic school can provide to the child in the book, “The time that a child spends in a full-time Islamic school can be thought of as a sort of incubation period if you will, if God wills, give him/her the strength of character to comfortably assume a role in the world in which we live” (p. 23). Yet, she also highlighted, “The ‘ilm we seek to instill in our children cannot be a combination of two diametrically opposed views of life, but a unified vision of the truth” (p. 10), thus reiterating her approach to integrated, holistic curricula and pedagogy.

Former Board Member of Islamic School of Seattle, Tarek Dawoud reflected, “She taught the kids ‘Since God is one, that means all creation comes from Him, all knowledge comes from Him, all people come from Him. There’s no bad knowledge, there are no bad creatures, there are no lower humans.’ In a given unit, the students would be learning about the physics of space and gravity, the Quran verses that talk about stars and the heavens, and then famous Muslim scientists who contributed to the optics of the telescope and close with a science experiment to fire a rocket. Just beautiful holistic education where religion and science were not at conflict or taught in separate enclaves. A true pioneer and visionary who was decades ahead of her time.” 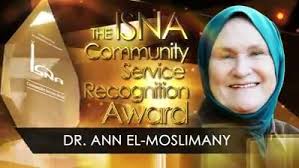 Dr. Mukhtar Ahmad, ISNA Head of Programs, reflected, “Late Sister Ann was a great source of inspiration for Muslim educators all over the country and her community in Seattle for a long time. Her intellectual and financial contributions made many projects possible. She was a strong believer and generous person who had devoted her life to the cause of Islamic education.”

She was the mother of Ahmed Ramsey El-Moslimany, Rasheed El-Moslimany, and Samia El-Moslimany, and a beloved grandmother. She embodied the spirit and practice of integrated, holistic learning and Islamic values, and was a generous servant of Allah, who helped many in her community and beyond. She is irreplaceable, but her legacy will live on in her children, students, and fellow educators. She was a scientist, a teacher, a thinker in education, and an author.

This obituary will be published in the Islamic Horizons March/April 2021 issue.