After twelve years, or up to fifteen years, of Arabic studies in an Islamic schools, what do our graduates have to show for it? And can they obtain a higher level of certified fluency without foregoing studies in Engineering, Medicine or Law?

The Arabic Flagship Program involves high level classes taught by experienced speakers in the target language offered to students of any major. The domestic courses are followed by a Capstone year in an Arabic-speaking country, usually involving an intensive summer of Standard Arabic and dialect study and two semesters that include enrollment at a university and an internship of the student’s choice. Courses and internship all receive credits at the original university. 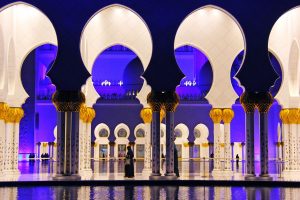 Most costs of the program are typically footed by several scholarships, thus easing the students’ monetary concerns. The Capstone year is spent at AALIM (Arab American Language Institute in Morocco) in Meknes, Morocco. The degrees offered to students successfully completing the program vary from a Certificate to a minor or major in Arabic. This, of course, is in addition to whatever other major the student is pursuing.

According to Dr. Sonia Shiri, Associate Professor and Director of the Arabic Flagship Program at the School of Middle Eastern and North African Studies at the University of Arizona in Tucson,

“The Flagship program is transforming the life trajectory of these undergraduate students. In addition to the extraordinary level of Arabic fluency they attain before even completing their B.A., it is providing them with a unique professional and cultural perspective that prepares them for operating in an increasingly diverse and global world.”

The Language Flagship programs were originally launched in 2002 in Arabic, Chinese, Korean and Russian for post-baccalaureate students. In 2006, it shifted to become an undergraduate program, and added Persian, Portuguese, Turkish and more to the list of critical languages involved. This became so successful that the goal is now to “push the model” down to elementary, middle, and high schools. Such a move might become a great opportunity for Islamic schools when the program becomes available in the future. As for now, only US institutions of higher education are eligible to host it.

In the meantime, for those Islamic schools who wish to offer their high school students a jumpstart on higher level Arabic, The University of Arizona’s Arabic Flagship Program offers a Jumpstart summer intensive program for high school juniors and seniors on its campus in Tucson.  Jumpstart is credit-bearing and is offered for a large tuition reduction.

Learn more about the Flagship Program offered at University of Arizona by watching this brief video.